You, me, a bunch of amazing adventurers, and a fantastically good cause!

I MC'd an entertaining and awe-inspiring line up of adventurers, explorers and crazy fools for a Night of Adventure in support of Hope & Homes for Children.

They've biked round the world, played cricket in Indian deserts, rowed across oceans, survived avalanches, taken their whole family on mind-expanding adventures, swum the length of the Mississippi River, rock climbed, canoed and run some of the most hostile environments in the world.  All for fun.

Each person presents a 'Pecha Kucha' talk - 20 slides x 20 seconds.  And that's it - a total of 400 beautifully crafted seconds for each speaker to share their journey, inspire and entertain.  It's a tough format to master, but it makes for a brilliant evening! 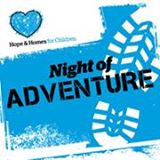 It was also an opportunity to learn more about the incredible work of Hope&Homes.

Working around the world, they redeploy a community's resources to take kids out of orphanages and help them back into families.  AND they support families so that they don't break down in the first place.

"You were an excellent MC…just the right balance of relaxed friendliness with the audience and professionally guiding us through the evening. Thank you!"

, organiser, Night of Adventure for Hope and Homes for Children

Starving Saints, women bricked into the walls of Churches, eating lepers' pus, ecstatic communion with Christ the Bridegroom....frankly, folks were getting up to all sorts of devotional adventures in the Middle Ages.

I explored some of the stranger practices at the St Laurence History and Genealogy Festival in Frodsham, Cheshire.

Across the weekend over £1,000 was raised for conservation of the Church. Thanks for coming down!

"Mary Ann's sensitive and humorous style had the audience chuckling (and sometimes grimacing!) at the details and many of them then went on to explore the building. A wonderfully lively talk." Heather Powling, organiser, St Lawrence Parish Church, Frodsham, Cheshire

Artists, philosophers, critics and scientists descend on Hay on Wye to stir up ideas, argument, music and some serious wine.  Crunchy and refreshing indeed.

Twenty years on, and the YBAs are still getting people hot under the collar.  This was a high-octane debate about the role of shock and provocation in art.  Was Saatchi's Sensation exhibition an insubstantial, teen-angst moment that we're well rid of, or a showcase of work that challenges cultural stagnation and complacency, a legitimate goal for art at all times?

The World in Your Hands

A rip-roaring debate, and one that was my favourite.  Anj Smith bemoaned the fact that her talent at painting tiny, incredible art gets in the way of her ideas sometimes; James referenced artists who have skill but no concept, and Iain argued passionately that art requires the reflexive process of making – and if the artists aren’t doing it themselves, the artistic merit of the work is reduced or perhaps even voided.  Lauren summed up beautifully – art requires concept, intention and technical achievement – the magic of art requires all the magic ingredients

Check out videos from the festival at www.artfestivalathay.org

"Mary-Ann had an excellent rapport with panellists and audience alike, and a strong command of the issues under debate."

, Head of Editorial, The and Ideas